TCR052 | Max Mlambo: Growing Up in a Ghetto, Overcoming Obstacles and Becoming a Marathoner

Today, I’ve got Max Mlambo on the line with me. I met Max a few years ago at a Zap Fitness Running camp. If you’re ever interested in going on vacation and getting some good running in, I highly recommend it. High in the Appalachian mountains near Blowing Rock, North Carolina, it is one of the most beautiful and peaceful places I’ve had the privilege to run and I’ve run; plus you get to hang out with the other campers and the elite athletes too. 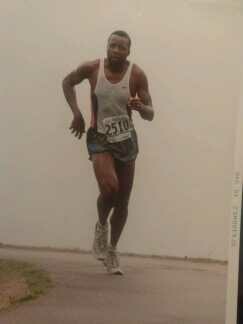 One of the things that stood out to me about Max was his personality. For someone who’s had the challenges he’s had in his life, he is unbelievably positive. His positivity is matched only by his remarkable way sharing the experiences that have made him who he is.

From growing up in a ghetto in Zimbabwe to immigrating to the United States, from sprinting at an early age to becoming a multiple time marathon finisher, Max has seen, been through and achieved an incredible amount in his life.

One of the things I loved most about this interview was when he talked about discovering a button in his head that he could switch off and on to deal with challenges he was encountering while on and off the roads, trails and tracks.

I was so excited to interview Max and to bring his story to you. There’s a lot of wisdom in his words. Listen closely and enjoy.

What we talk about

Links from the show

Until next time, run strong, run long and be happy.