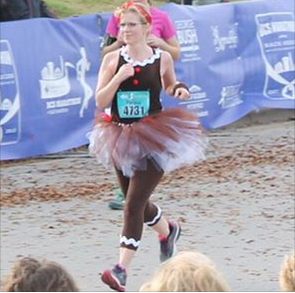 Today, I am excited to introduce you to runner, mother and Conscious Runner Community super hero, Patricia Tuttle Russell!

Like many of us, Patricia began running in the most unusual way. But, I’ll let her tell you about it.

CR: What inspired you to start running, and when did you first start to see yourself as a runner?

Before the age of 40 I never wanted to be a runner. It happened by accident. I was inspired to start walking after my doctor told me my bone density was not good. She wanted me to begin taking a prescription, and since I try to avoid pharmaceuticals I began walking and increased my calcium intake. After one year of walking at least 5 days a week for 30 minutes, a second bone scan showed my bone density had increased! It was a good feeling knowing that I had taken control of my health.

Walking soon became boring and I began running the length of one telephone pole to the next in the middle of my walk. Slowly, very slowly, I began running more and more “telephone poles.” A friend of mine who has been a runner since high school invited me to run a local 5k with her. I wasn’t quite up to 2 miles at this time, but decided to sign up anyway. I loved the feeling of accomplishment as I crossed the finish line…and the addiction began. I couldn’t wait to sign up for another. 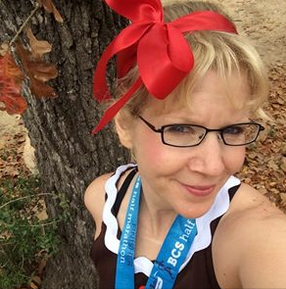 I was never athletic, even in high school. I was the skinny, wimpy kid always chosen last for any sport. I always saw myself as weak. Running has shown me I am strong, maybe not as strong as many, but stronger than I ever thought I could be, and I have the ability to increase that strength if I want to put the work into it.

It was a long time before I saw myself as a runner. I still sometimes tell my family, “I am going out for a walk,” when actually I am probably going for a 5 mile run. It has been a gradual process for me. My closet having more running clothes than non-running has helped me feel like a real runner.

CR: What was the biggest hurdle you had to overcome when you were a beginner runner?

I still feel like a beginner. Most of my hurdles have been/are mental. I have to remind myself a lot that I am stronger than I think I am. I also need to stop comparing myself to others. I believe running is such a great sport. We can get out there and compete against ourselves. We can show our past self that our present self is stronger.

CR: Can you outline one of your favorite races so far and what made it memorable?

My first half marathon is the most memorable because it was my first time to run that distance. Getting that finisher medal around my neck and obnoxiously wearing it for two days straight was wonderful. Posting race pictures on Facebook hoping that former classmates would see and know I am no longer that skinny, wimpy kid from school gave me a great feeling. (Surely I am not the only one who has these thoughts!) The BCS Half Marathon in College Station, TX offers an amazing race! Very supportive, many volunteers and spectator encouragement along the way…not to mention tons of food at the finish line!

CR: Have you had any low points as a runner and how did you work out of them?

My low points have been during injury, when I cannot get out there and run. I am so accustomed to having the stress relief that running provides that I don’t do well emotionally when I cannot run. I have to do lots of praying when something prevents me from running.

CR: Do you have a mantra you use on training days or in running events and races?

“You are stronger than you know.” Sometimes during races it is simply, “The faster you go, the sooner it is over.” 

CR: What does it feel like when you’re in the zone?

It feels like I could run forever, as if I am floating. Doesn’t happen often, but when it does it is amazing!

CR: What are your favorite things to eat & drink either before, or after a run? 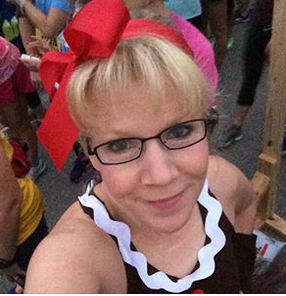 I would prefer anything chocolate after a run, but thankfully I don’t keep it in the house very often. In the summer I like to make a smoothie after I run. In the winter, if it is cold, hot cocoa. Homemade whole wheat waffles with peanut butter and honey are one of my favorite after run quick foods.

CR: Do you have a favorite piece of running gear? What is it?

I don’t have much running gear. I just put on running clothes, grab my Iphone and go! Someday I would like to try a hydration vest. Long runs are rough in the summer in Texas.

CR: Do you have any advice for newbie runners?

Don’t compare yourself to others.

No matter how slow you may be, you are still moving forward.

CR: How has running changed you?

Running has changed me in many ways. If has given me a release for stress, a network of friends, a confidence in myself knowing that I can achieve more than I thought. It has also shown me the power of support. Running can be as much about battling through mentally as it is physically, and the power of supportive friends is invaluable.

CR: Finally – a few fun questions for you!

CR: Tea or coffee? Tea. (I would say coffee but it gets me too wired!)

Hope you all enjoyed getting to know Patricia.

For more inspiration, support, motivation and community, join the Conscious Runner Community. We’d love to see you on the other side!