Hey Conscious Runners! Welcome to another amazing interview! Yes! Can you believe it? I’ve got runner and co-founder of Chi Running, Danny Dreyer on the line with me again! I first interviewed Danny in August of this year. If you haven’t had a chance to listen to that episode, I suggest you do; especially if you want to run with more grace and ease. During that interview, we connected on such a level, I knew our paths would cross again. However, I didn’t anticipate it being so soon. When I reached out to Danny the second time I was unsure what we would talk about, as we covered so much in our first chat. And then it dawned on me— Chi Living. Yes! We would talk about how to incorporate Tai Chi principles into ordinary life, thereby making us better runners. 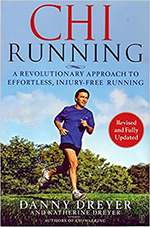 Danny is an accomplished Ultra Marathon runner (races longer than a marathon) and has raced every distance from a 10K to 100 miles. He has successfully completed 40 ultra-marathons since 1995, finishing in the top 3 in his age group in all but one. In August 2005 he placed second in his age group in the USATF National 50k Championships.

He  has lived a lifestyle steeped in holistic living, meditation, and personal wellness for over 30 years. Healthy eating, physical exercise and rejuvenating activities are mainstays in his life and the foundation of what he teaches. Danny is also one of the artists on the Running Deep album of guided meditations for runners that I’ve been raving about. So, if you haven’t had a chance to get that album, be sure you test out a few of the sample tracks to see if its something that can enlighten your running.

I completely enjoyed my chat with Danny and know you will too.

[Tweet “”A conscious life means having a choice” ~Danny Dreyer”]